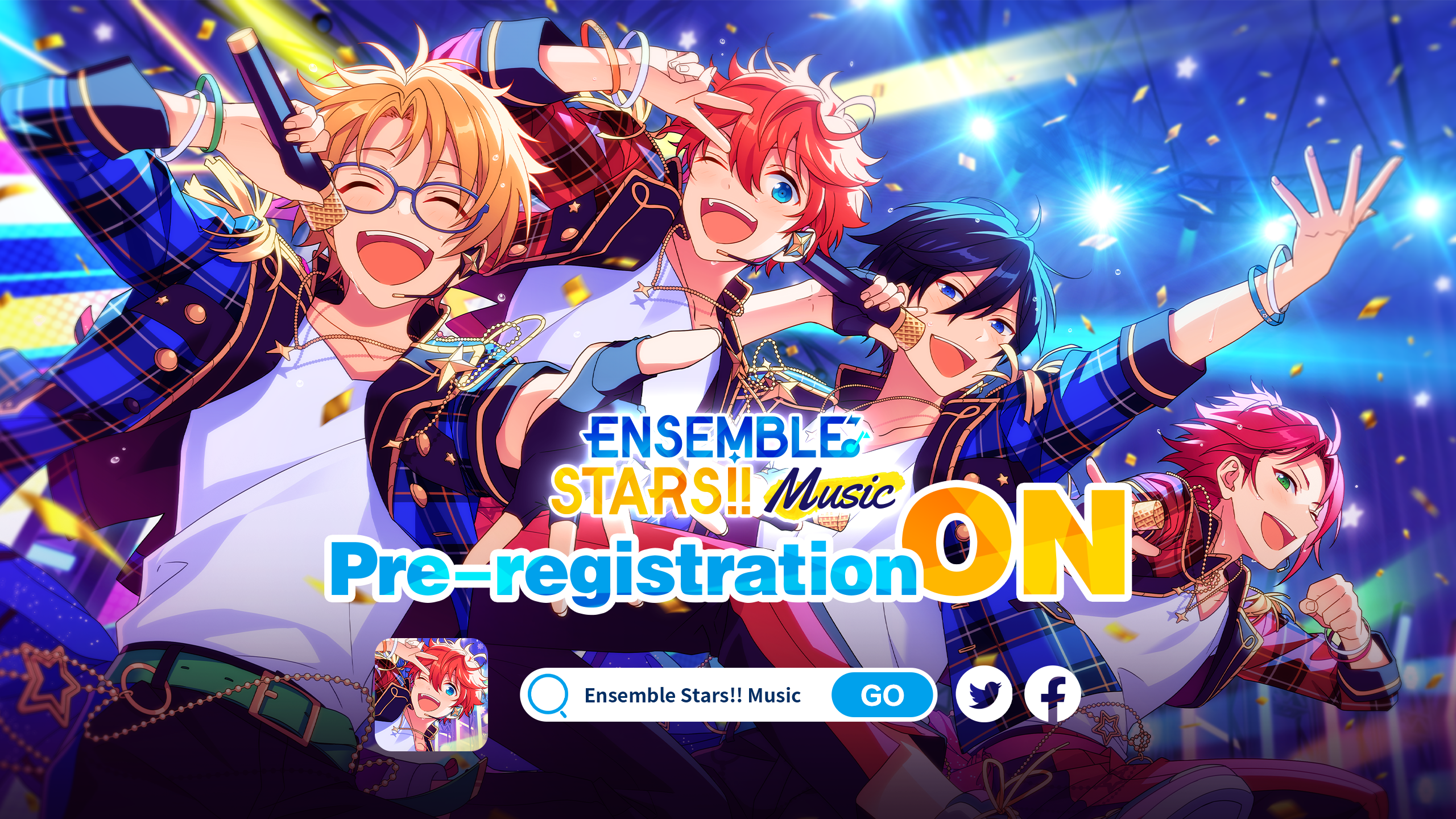 Ensemble Stars!!Music, one of the most popular music-themed idol training mobile games in Asia, begins the pre-registration for its first ever English version, which will be available in English speaking regions including Australia, Canada, the United Kingdom and the United States. Players can click the links below to register for Ensemble Stars!!Music since Dec.24 and get loads of goodies to boot:

Early bird who completes the registration through the above links will be able to claim for a wide range of bonus from Ensemble Stars!!Music, including an Exclusive Title, 200 Diamonds, 2 DIA Scouts Tickets, 3 Gem (L) in 3 colors (1 for each color) and 3 Gem (M ) in 3 colors (1 for each color). Successful invitations of new players to pre-order will also be rewarded with additional DIA Scouts Tickets. Moreover, numerous extra rewards will be doled out according to the defined pre-registration milestones various from regions as well. Don’t miss the benefits by clicking the pre-registration links above for more details!

Ensemble Stars!!Music is a full immersive rhythm mobile game deriving from one of most influential anime IP in Asia, Ensemble Stars!, which has enjoyed massive success since it was first released in 2015 and ranked 3rd on the list of “the Most Tweeted About Video Games in the World” according to a Twitter report about Gaming and esports in 2020.

Surrounded by the glories above, the first ever English release of Ensemble Stars!!Music is a highly anticipated game for players in Australia, Canada, the United Kingdom and the United States, which will definitely bolster more buzz for the game.

In Ensemble Stars!!Music, 49 idols just graduated from the Yumenosaki Academy, a prestigious arts school with a long history of producing talented idols, and they joined the entertainment agency known as Ensemble Square to chase their dream of becoming real shining stars. Players can choose one or more idols as their favorites from the 49 unique rising stars, to experience the bittersweet journey with them, and forge their paths in the vast world of entertainment.

To bring an optimal immersive experience to players, Ensemble Stars!!Music built a 3D Live Mode for rhythmic music games with 4 difficulty levels for players to enjoy the beats based on their own favor. Apart from that, more than 40 first-class voice actors including Hikaru Midorikawa, Yuki Kaji and Tetsuya Kakihara etc., are contributing their glamorous voices to the characters of the game, which is an auditory feast for all. The compelling storylines developed by renowned Japanese light novelist, Akira, enable players to experience all the moments of joy and tears with their own idols together. In the game, players can release their imagination to customize a colorful daily life for their beloved idols. Unlimited fun of the game is waiting for players to discover.

About Ensemble Stars!!Music：
Ensemble Stars!!Music, an essential sequel of Ensemble Stars!, is one of the most popular music-themed idol training mobile games worldwide. Forty-nine idols from Yumenosaki Academy just start their journey in the vast world of entertainment. A brand-new immersive experience of training your exclusive superstar is there for you to embrace.

About Happy Elements:
Established in 2009, Happy Elements is a company concentrating on the development and operation of mobile online games as well as the development of original IP. Owning a team of almost 1000 outstanding talents from all over the world, Happy Elements has set up worldwide game studios and research institutions including in Beijing, Shanghai, Shenzhen, Kyoto and Tokyo. Adhering to the idea of “MAKE THE WORLD HAPPY! “, Happy Elements is always committed to providing users with a wide range of interactive entertainment products.