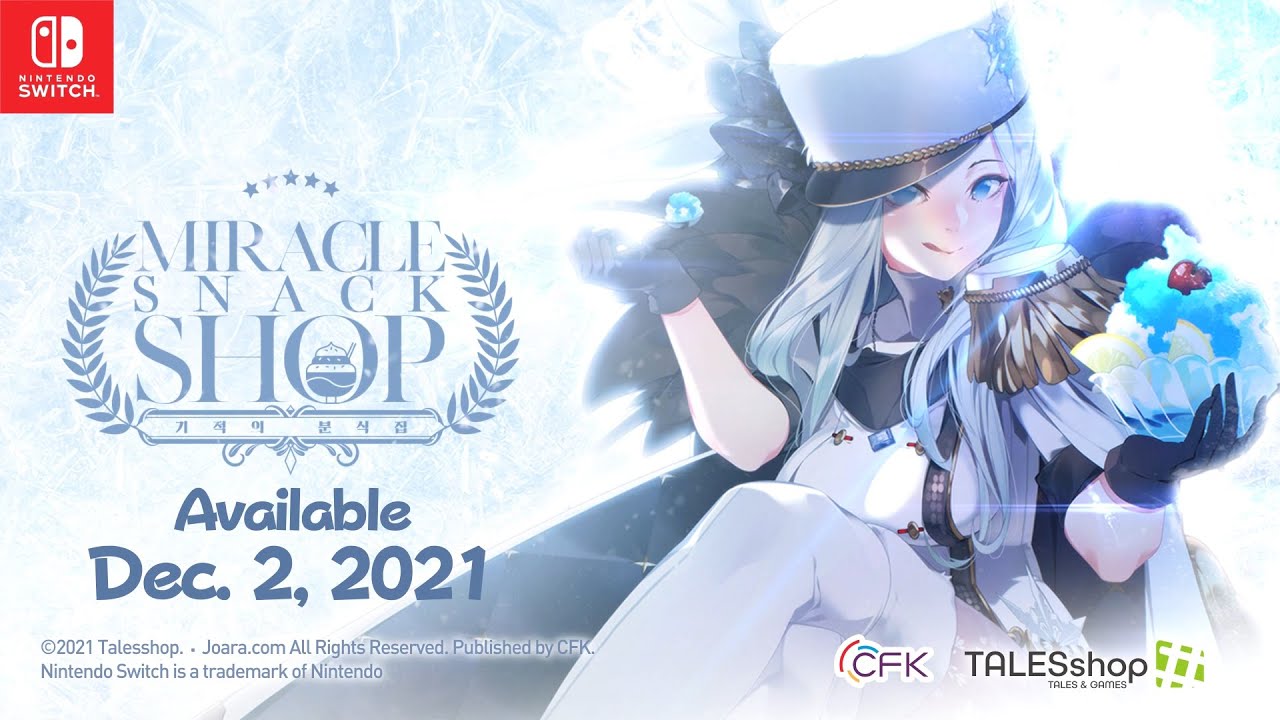 Developed by artisan visual novel maker Talesshop, Miracle Snack Shop is a dating simulation game that has been praised in Steam for its beautiful art and dramatic story. It is coming to Nintendo Switch with a number of bonus content including 1080p support, new Japanese voice over and the epilogue Philia After Story.

● Story
After facing some major adversity, Seolhwa Cha ends up owning a small snack shop.
There is just one problem: business is dead.
Seolhwa doesn’t have time to sing the blues though because in his attic something has appeared… A portal?
Out from that portal walks… a queen from another world?!

As Seolhwa serves the first bowl of shaved ice to Philia, also known as Queen Salt…
He takes his first step toward growing closer to her……

A frozen treat of a story that will make your heart pound, and it all begins in your snack shop!

● Manage business and relationship at the same time
As the protagonist Seolhwa Cha who runs a snack shop, the player will have unexpected but special encounter with two heroines. Colorful happenings begin to unfold when Philia, the queen from another world, and Mira, a YouTuber looking for scoops, make a visit to Seolhwa’s snack shop.

Catching two birds with one stone will become the player’s goal as they build relationships with heroines and grow the business at the same time. As well as spending time together with the heroines in various episodes, inventing new shaved ice and starting a marketing campaign are also available as management features. The story’s end will be decided based on how close the player has become with a heroine.

● Exclusive features for Nintendo Switch
Miracle Snack Shop for Nintendo Switch exclusively features another fun in experiencing the storyline with new character voices by well-known Japanese voice actresses. As the game also contains original Korean voices, the player will be able to enjoy comparing the difference between the original and new interpretations of the two heroines.

In addition, compared to the PC version, the Switch edition now supports FHD(1920 X 1080) resolution and includes Philia After Story, which is originally a DLC content on Steam. Available after the game is cleared, this bonus episode features the whole new side of Philia that was never found in the original story as well as various side content for visual novel fans.

Philia Salis (Voiced by: Marie Miyake / Hyewon Jeong)
A queen from another world who accidentally ended up in the snack shop after crossing through a portal in her closet.
She goes by the name “Queen Salt,” and her particular way of speaking seems to prove that she is true royalty.
As she visits the snack shop every week for shaved ice, she grows closer and closer to the cook……

Mira Joo (Voiced by: Mai Ishihara / Mi Jang)
A former journalist who visited the snack shop as a YouTuber.
For some reason, she offers a business opportunity to the cook.
There seems to be a story behind the difference between her energetic character in the video and her actual personality.

Gamers can also find information about Miracle Snack Shop for Nintendo Switch in its official website(https://www.cfk.kr/miracle/kr.php).

Miracle Snack Shop, a frozen treat of a love story that takes place in an ordinary snack shop, comes to Nintendo eShops worldwide today(Thursday, December 2). And don’t miss the chance to get a 10% special discount on your purchase in Nintendo eShops! Offer ends on Wednesday, December 15, 2021.