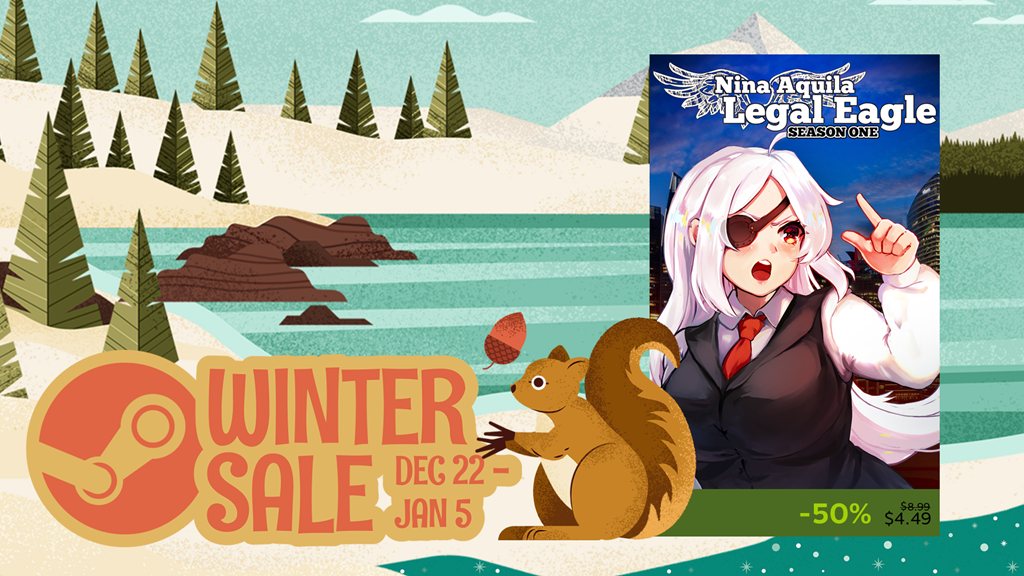 The very best way to argue at Christmas: In court!

Tanuki-sama Studios is happy to announce that their popular indie courtroom adventure game NINA AQUILA: LEGAL EAGLE, SEASON ONE is seeing a price reduction for the Winter 2021 Steam Sale.

“NALE” is an indie courtroom adventure game, presented in the style of an episodic TV anime show. The game supports Windows, Linux and Steam Deck platforms.

This “Season One” release is an enhanced collection of three episodic titles that were originally released on a range of indie services such as itchio & Newgrounds, seeing a 5-star rating in over 200 reviews and earning recognition with a cash prize in the judging of “Best of Newgrounds, November 2020”.

The game’s most recent update added a range of additional features, including…

These new features bolster the Steam release from July, which provides the player with over 10 hours of anime-themed courtroom drama content, ‘set in a world where all anime genres exist at once’.

These improvements were crowd-funded with a successful funding drive back in Autumn:
“Our community are amazing,” says Ethan Fox, of Tanuki-sama Studios, “we planned for 7 weeks of crowdfunding. We could scarcely believe that they propelled us to the target in just 3 days.”

More info about the successful crowdfunding initiative can be found here:
https://twitter.com/NinaAquilaGame/status/1428434799409106956

TSS has been developing the Nina Aquila: Legal Eagle series since 2018, on a micro-budget funded out of their own pocket, supplemented with revenue from sales of the game’s episodic releases. In that time, the game has reached fans across the globe.

The game is presently available here on Steam:
https://store.steampowered.com/app/1547290/Nina_Aquila_Legal_Eagle_Season_One/

A full presskit has been uploaded to this URL for media use: https://tanukisamastudios.wordpress.com/2021/07/06/presskit-nina-aquila-legal-eagle-season-one/

The collection includes ~10 hours of content, in which players take on the role of Nina Aquila, a rookie defense attorney, as she represents clients accused of capital crimes. In it’s three-faceted gameplay, players will INVESTIGATE crimes (examining crime scenes and speaking to witnesses), PARTICIPATE in activities relevant to their case (such as illegal street racing) and finally, step into court and DEFEND their client in the manner of a courtroom drama visual novel.

NALE has previously appeared on services such as Newgrounds & itch.io in an episodic format (starting in winter 2018), where the releases have garnered praise, with Chapter I receiving “Best of November 2020” on Newgrounds and a 5-star review score on itch.io from over 200 user reviews.

This new collected release is significantly enhanced over the original episodic releases. Enhancements include a wide variety of audio-visual and feature improvements, including new character art, more & higher quality speech samples, reworked video sequences, Steam Achievements, an unlockable explorer mode and many more! This is the definitive NALE experience for both existing and new fans alike.

About Rachael Messer
Nina’s utterances in-game are voiced by Rachael Messer.
Rachael is an industry veteran, recently voicing Enterprise in Funimation’s Azur Lane dub. She has a long history of dub roles in both anime & videogames, including Paladins, Warframe, Akashic Records, Princess Principal, Knight’s & Magic, A Centaur’s Life, Infinite Dendogram and the remake of System Shock.
Ethan originally contacted Rachael after hearing her performance as the protagonist in Forgotten Anne, by Square-Enix, believing her voice would be perfect for the role.

Ethan’s games draw upon his past experiences living in Japan, as well as a lifelong love of anime & manga. This season, he is watching Fruits Basket and To Your Eternity.

NALE was conceived as a way to create a narrative experience that has plotting, pacing and direction similar to that of watching an anime show, as well as serving as a homage to multiple anime genres. TSS’s ambition is to see NALE realised as a fully-fledged anime production.