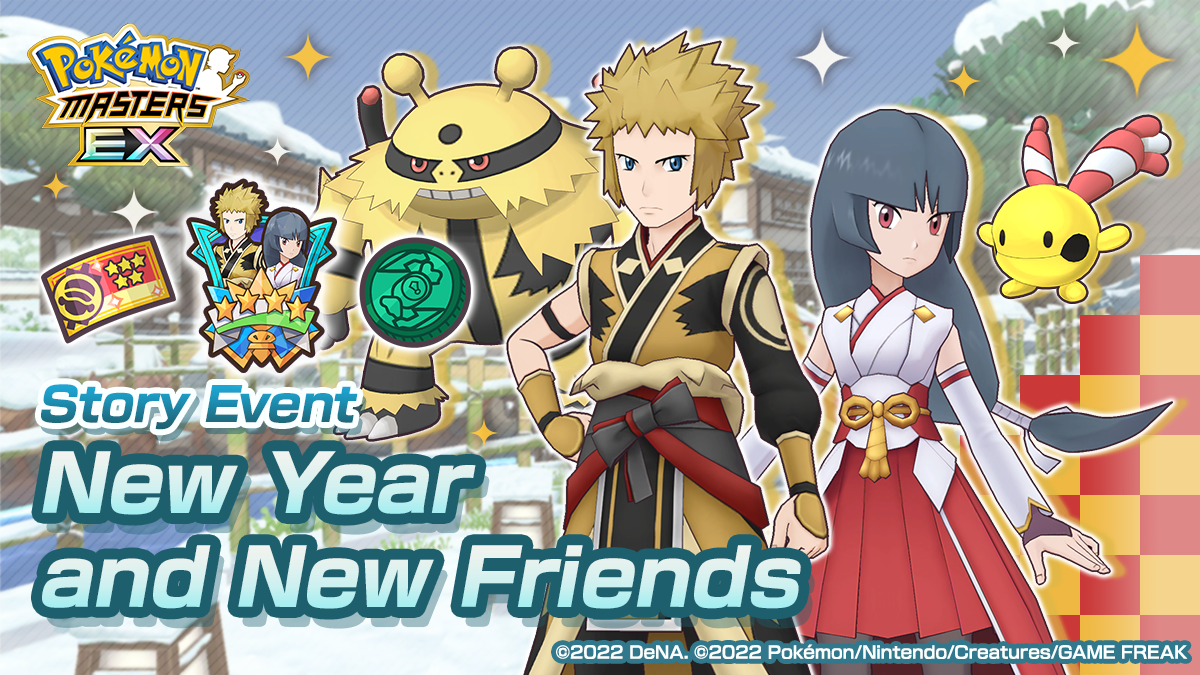 DeNA also revealed a trailer marking the passing of the seasons that features the game’s seasonal sync pairs in 2021. This trailer can be found here on the official Pokémon Masters YouTube channel:

Players will be able to add New Years-inspired versions of Volkner (New Year’s 2022) & Electivire and Sabrina (New Year’s 2022) & Chingling via the Volkner and Sabrina Seasonal Scouts, available from now until January 18 at 5:59 a.m. GMT. The Electric-type sync pair of Volkner (New Year’s 2022) & Electivire can deploy moves like Discharge, which attacks all opponents at once and has a 30% chance of paralyzing opponents. The Psychic-type sync pair of Sabrina (New Year’s 2022) & Chingling can utilize tactics like Condition Shield, which prevents the player’s team from becoming afflicted by status conditions. Both sync pairs can reach a 6★ EX Potential rating, which increases the strength of their sync moves and provides them with an additional New Years-inspired outfit to wear.

An in-game story event titled “New Year and New Friends” is also available now until January 18 at 5:59 a.m. GMT for players who have completed Chapter 1 of the Main Story. This event features Volkner and Sabrina in their New Year’s outfits as they participate in the New Year’s Battle Tournament, a competition where the team with the longest winning streak is declared victor.

A trailer commemorating this event and featuring an epic clash between Dialga and Palkia can be found here on the official Pokémon YouTube channel:

Players can check the in-game menus for more information. Note that in-game event dates are subject to change without notice.

Pokémon Masters EX is a real-time battling and strategy game for compatible Android and Apple devices that is free-to-start with in-app purchases. It can be downloaded at the links below:


About Pokémon
The Pokémon Company International, a subsidiary of The Pokémon Company in Japan, manages the property outside of Asia and is responsible for brand management, licensing, marketing, the Pokémon Trading Card Game, the animated TV series, home entertainment and the official Pokémon website. Pokémon was launched in Japan in 1996 and today is one of the most popular children’s entertainment properties in the world. For more information, please visit www.pokemon.co.uk.