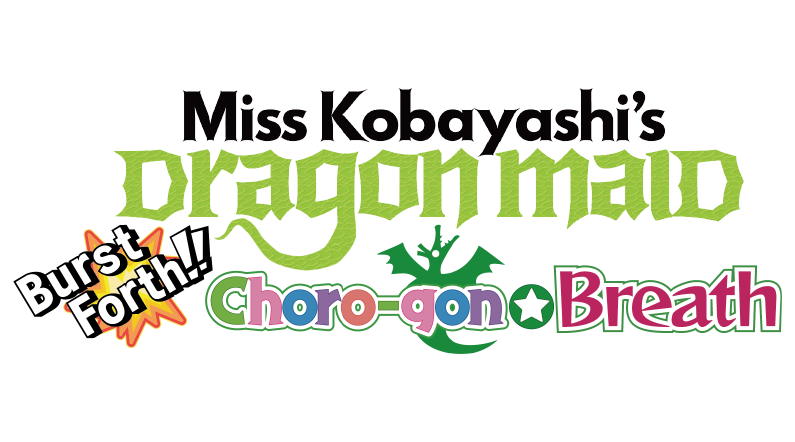 Physical game to include an exclusive Weiss Schwartz TCG card

After receiving a cryptic email, Miss Kobayashi and her maids go to Takiya’s house to investigate. There they are mysteriously (and overdramatically, let’s face it) sucked into the PC. Help them clear stages by banding together and using their wits to defeat the computer. Using the 3-fold attack system of Long Range, Melee and the unique and deadly Choro-gon Breath (they’re dragons, get it?), you’ll obliterate the enemy! Combine the power of three with the Tag System by using Tohru, Kanna, and Elma to tackle each stage with Kobayashi’s support. There’s no enemy they can’t defeat! In certain conditions, activate the dragons’ Raging Spark to deal even deadlier damage! As you progress, collect 30 unique Memorial Pieces of the friends’ precious daily life in beautiful illustrations created especially for the game!

Miss Kobayashi’s Dragon Maid: Burst Forth!! Choro-gon☆ Breath has been rated “T for Teen” by the ESRB.

﻿To stay up to date on all the news, follow Aksys Games on Twitter, Instagram at TikTok at @AksysGames, and join our Thursday livestreams on Twitch at AksysGames, with stream highlights and trailers on our YouTube channel.

Aksys Games Localization, Inc. is a visionary video game publisher committed to publishing unique and high-quality interactive content for all current-generation platforms since 2006. The company was a pioneer in localizing otome games for Western audiences, including the award-winning Code: Realize and Collar X Malice series. Its lineup of games features the wildly successful BlazBlue, Under Night In-Birth, and Guilty Gear franchises, Little Dragons Café, and the award-winning Spirit Hunter: Death Mark and Spirit Hunter: NG adventures. Aksys Games and its unique products can be found on the company’s website, www.aksysgames.com.